Paulo Cardoso is one of the characters in The Conjunction of the Realms series.  Paulo came from the southernmost parts of Brazil and arrived in Northern Ireland as an exchange student during secondary school. Upon graduating, he went to the University of Ulster to get a degree in film. Paulo now has his own film production company. His famous documentaries require constant travel throughout Europe, Africa, Indonesia, and mainly South America. One beautiful documentary by Paulo Cardoso reports on the Vitoria Regia, the most peculiar and largest water-lily in the world, indigenous to the Amazon region. The Vitoria Regias vary from one hundred and forty to one hundred and eighty centimeters or four to six feet in diameter, and can hold up to forty-five kilograms or one hundred pounds. A child can sit in the middle of the plant and neither the plant nor the child will sink. The Brazilian Indian tribe Tupi-Guarani has a legend explaining the origin of this unique water plant (to listen to the legend, instead of reading it below, you can go to Soundcloud®).

“It was said of the moon goddess, Iaci, that she was known for her majestic presence in the heavens inspiring young native women to fall in love. The legend also tells how the young women who loved and were loved the most, eventually became a shiny star, glamorizing the heavens with their brilliance. Naia, the chief’s daughter and princess of the Tupi tribe, became so enthralled with this legend that every full-moon night, she would climb the hills to be closer to heaven and cry out to Iaci, longing for love. One night, Naia looked down from the top of the hill and saw Iaci’s reflection on the waters of a calm lake, as if spending countless hours contemplating her own beauty. The splendor of that reflection convinced the young Indian that the moon had heard her cry and descended from heaven to bathe in the pristine lake. This was Naia’s chance to be closer than ever to Iaci, when she, too, could be stricken by love and be transformed into a bright, shiny star. In no time, the princess ran down the hill and threw herself into the illuminant waters, in hopes to touch the celestial being. The deeper she swam, the further she became from Iaci; eventually, Naia was overtaken by the waters and drowned to her death. Iaci, moved by the girl’s unfortunate tragedy, was unable to transform Naia into a star in heaven, so she transformed her into a different kind of star: the magnificent ‘Star of the Waters,’ also known as the Vitoria Regia. Thus was born the aquatic plant and its exquisite flower that only blooms during the full-moon, exuding unique, sweet perfume; the flower’s petals are first white to reflect the moonlight; the following morning, the petals turn pink and then red when they finally wither, after only three days.”

The lake from which the legend originates is to this day called “Mirror of the Moon,” and it is located near the Amazonas and Pará states border. 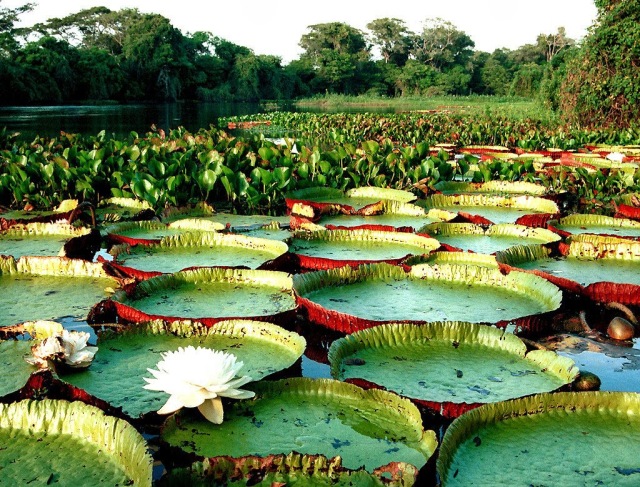